[Main Conference - ACM CC2017 Details Here]
Brewed in HotGlue
‘In Running’ is a multi-instrumental performance with electronics, violin, and viola and images. Composed in a collage-like ‘stretchable’ structure, musical fragments, or musical ‘cells’ are recombined and re-dramatized according a flexible, film-like score. The approach to this composition was created from the perspective that the body is not only an activator of time, but is like a memory box filled with bits of cultural fragments and people whom we encounter. Our experiences, be it in the form of words, music/sound or movement, is imprinted into our cells, as we continue to be in a unique and a constant dance with time.
Coming from a multicultural background where the sensation of un-rootedness is a constant, a shift in perspective towards music, in treating all sound that was experienced as equal bits with no hierarchy (regardless musical genre, instrument, or culture identity of the music) has allowed for a new approach in creating this collage-like composition.
In film, one is able to travel to another time and place in an instant through a single film-edit. In a similar logic, the performing body, or myself, moves through this score in a similar manner while accessing memories, time and place.

Leyna Marika Papach is an artist from Japan and the United States. Her compositions house the languages of dance,
theater, sound, and image. Leyna's performative work has been presented internationally. Her latest opera, SONG premiered in 2016 at the HERE, NYC. As a violinist, she has collaborated with a wide range of artists (J.G.Thirwell, Geraldine Fibbers and others), performing in venues/festivals such as; Unlimited Festival (Austria), HAU (Berlin), International House (Japan),
All Tomorrow's Parties, BAM, UNESCO, The Stone, and many others. Leyna holds an MFA in sound/music from Bard College,
MA in Theater/Dance studies from DasArts, Amsterdam, and studied violin at the Prague Academy of Music. 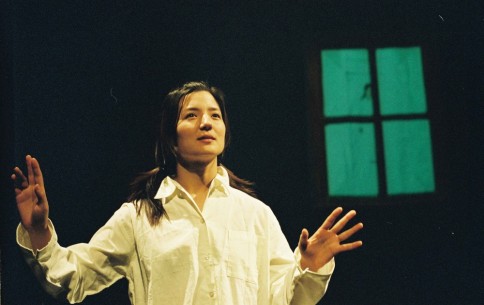 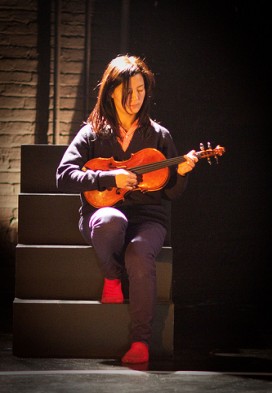