Getting to Venice and C&C’22

Venice is a well-connected, and therefore easy-to-reach city in the North-East of Italy. Venice has two airports. The major (and closer) airport is called Venezia Marco Polo. It is served by many major European airlines. In addition, since the summer of 2020, some US airlines have resumed direct flights to it. The other airport is called Venezia Treviso, and is really in the city of Treviso, about 40 minutes from Venice. Venezia Treviso has grown into a hub for low-cost airlines bringing people to the region. Further afield, both Verona and Florence (Firenze) have airports, but you would need to take a train to reach Venice.

Venice is also on Italy’s excellent high-speed railway network. You can reach Venice by train from Milan in 2h40m from Rome in 4h. Milan and Rome have major international airports. Another alternative is to drive to Venice, but long-term parking is a challenge. If you do drive, plan in advance. It is often more cost-effective to park on the mainland, in Mestre, or at Marco Polo Airport.

Reaching the City of Venice

Give yourself time to get into the city of Venice, which is called ‘Venezia’ in Italian. Very little in Venezia moves at more than 5km/h, so it will take a little while.

If You Arrive at Marco Polo Airport

There are 4 different routes to Venezia from the city’s major airport:

If You Arrive at Treviso Airport

Catch the regular airport bus service from the airport to Venezia. It takes about 40 minutes to arrive in Piazzale Roma in Venezia, near the Railway Station.

If You Arrive at the Railway Station

Trains to Venezia take you across the lagoon and into the city directly. Make sure that you take the train to the end of the line, at Venezia Santa Lucia Station. Do not get off at Venezia Mestre (unless you are staying there).

Once You are in the City

Venezia is, in simple terms, a Medieval city. There are no roads and no cars. This leaves two ways of getting around. The first is to walk. The second is to use the ACTV water buses – called the Vaporetti. These water buses are quite regular, and generally run on time. However, the buses are limited to the larger waterways – the Grand Canal, Rio Cannaregio and the waterways around the outside of the city. So, most of the time, a waterbus will get you in the proximity of where you need to be, but you will still need to walk.

For visitors, the water buses can also be expensive. A single ticket for 75 minutes costs €7.50, valid from the time that you ‘stamp’ it at the start of the journey. Single- and multiple-day tickets cost more, but offer better value-for-money if you visit multiple places in the city. Details about the ACTV services are online at https://actv.avmspa.it/en. The website is not as usable as it could be, so if you have questions, do ask the staff in the ticket offices at the main boat stops. All of the staff speak English. Note also that the C&C’22 conference will provide delegates with multi-day ACTV travel passes for the duration of the conference.

Most of the conference will take place on Isola San Servolo. San Servolo is a separate island in the Venetian lagoon, so it can only be reached by boat. There are several boat options available: 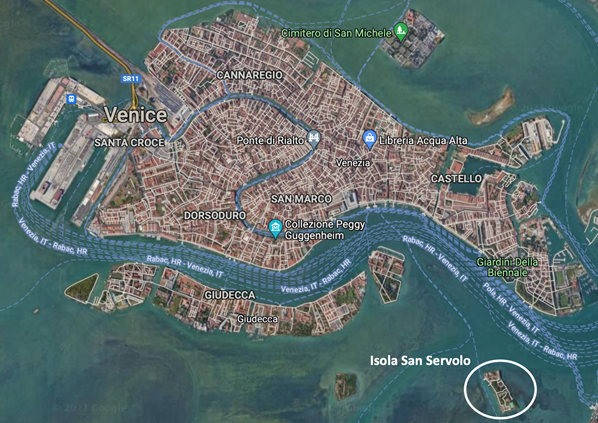 Where to Stay in Venezia

There is accommodation on Isola San Servolo, which the conference will make available to you. Rooms on the island will be available as single, twin and larger rooms, which can be shared. However, Venice is only 2 miles long and, at its maximum, 1 mile wide, so all of the other proposed venues, accommodation and attractions are close to each other. Venice is one of the world’s great tourist destinations, and as a result, it has evolved to have a vast number and range of accommodation. In 2020, the main city area has over 30,000 hotel beds and over 5000 properties registered on AirBnB. Both the hotels and rentals are available for all price ranges. Moreover, the last years have seen a rapid expansion in the number of hotel beds and property rentals in nearby Mestre – a 15-minute tram ride from Venice. Mestre tends to be cheaper than Venice, and has evolved to cater for visitors on low budgets. Room availability is not anticipated to be a problem – the conference will take place in June 2022 – after the launch of the Biennale in May, and before the main summer tourist period in July and August.